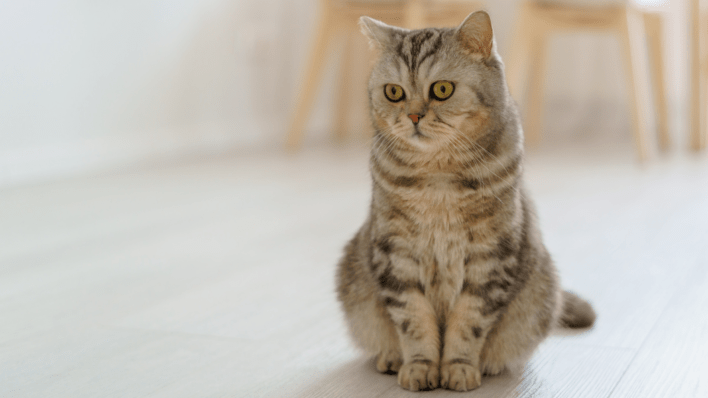 Full article with thanks to: cuteness.com/13710424/which-emotions-do-cats-have

Just as one of your cats saunters up to his food bowl, the other one launches a stealth attack from behind to nose his way into first dibs at the dish. This elicits an angry hiss and a swat from a paw.

But just minutes later, your kitty is butting his head against your knee and purring up a storm in seeming bliss. Like both humans and canines, cat emotions and body language go hand in hand. They can express a range of emotions that are usually signaled loud and clear.

What’s more, studies show that cats can also pick up on the emotions of their owners. In one study, researchers from the University of Oakland found cats behaved more positively, such as purring and rubbing around their owner’s ankles if their owner was smiling. Conversely, cats weren’t as friendly toward owners who frowned.

According to a study of more than 1,000 pet owners from Belgium and the Netherlands, cats expressed anger more often than dogs. It’s not hard to identify an angry cat by his body language. A quick look at a cat’s emotions chart will show a number of characteristics of a cat who’s angry about anything from the baby pulling his tail to getting his claws clipped at the groomer. These signs include:

On the other hand, cats often feel joyful and happy. This often happens when interacting with their owners. Purring is a sign of contentment, and some cats will even start drooling when intensely happy, possibly when their cheeks are scratched or they are rubbed under the chin. Happy cats will stand tall with their heads held high and their tails standing straight up. Their eyes may half close as they relax.

Dutch researchers consider jealousy a “complex” emotion. Researchers find it’s a little harder to show cats have complex emotions, but one that’s most common is jealousy. Cat owners reported this emotion more often than ones with dogs. Other complex emotions include disgust and compassion.

And anyone who has more than one cat or a cat and a small child has likely experienced their cat’s battle with the green-eyed monster. Does your cat plaintively meow while you’re feeding your baby, trying to butt in for attention? Or one cat may feel jealousy if he sees the other getting a treat when he hasn’t had his yet. Signs of a jealous cat may include tail swishing, and when the envy borders on anger, hissing and possible aggression.

Whether it’s an impending trip to the vet or a dog impinging on your cat’s territory, a cat’s anxiety can ramp up quickly. Cats generally feel fear when they perceive something could harm them. They may become anxious at the very sight of their carrier because they associate it with unpleasant trips to the vet. Some cats are terrified at the sound of thunder or fireworks and may run to a hiding place.

Your cat may tuck her tail between her legs when she feels frightened or it may bristle. Her pupils may dilate, and she may pull her ears back.

Disgust is another complex emotional response that cats seem to show more readily than dogs. Has your cat ever sniffed something intently, only to rear up with lips pulled back in an obvious show of disgust toward a smell you’re not even aware of?

Cats may also display a less intense version of disgust that generally appears to humans as apathy. They may walk up to a dish of food, take a quick sniff and amble away, or you may get out a favorite toy only to have your cat take a disdainful glance at it and begin to wash instead.

Full article with thanks to: cuteness.com/13710424/which-emotions-do-cats-have

Stay in the know about the latest pet information by bookmarking our advice blog.

Looking to travel your pet within or outside the United Kindom? Example: Birmingham to Paris. Get in touch with us and complete our quick and easy quote form.